Rotary World President comes down under 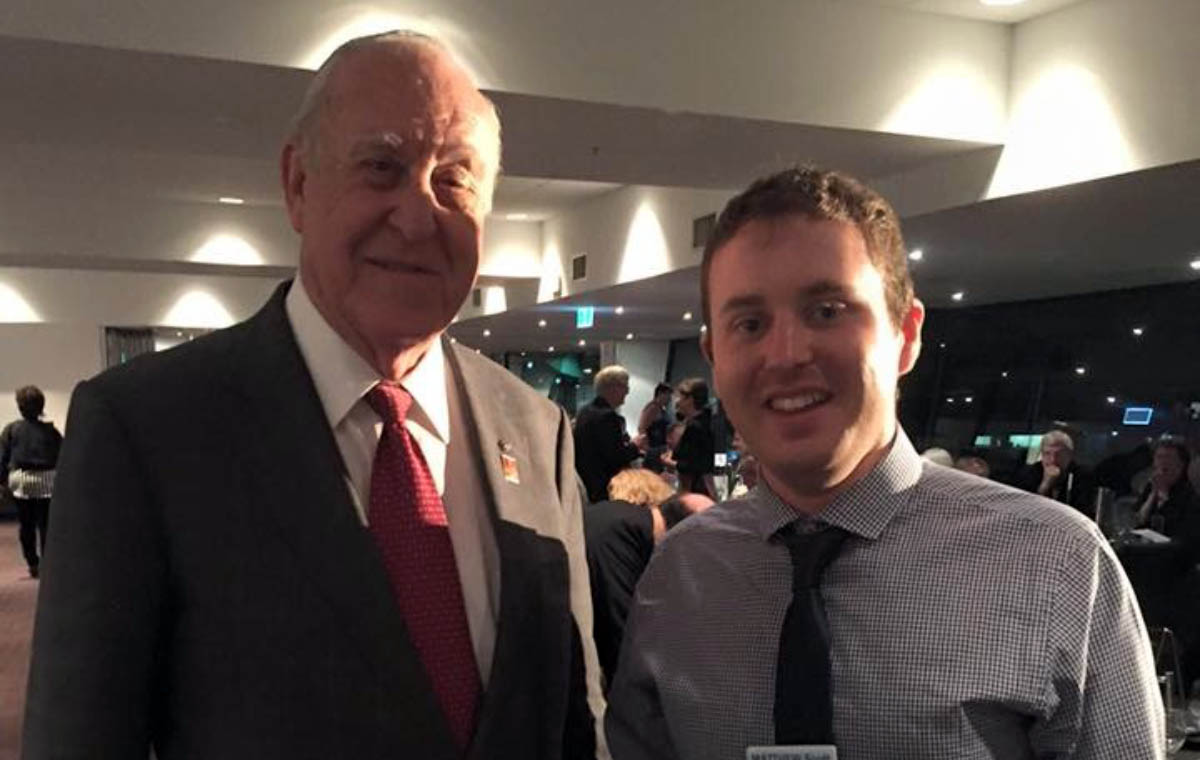 It’s not very often that Bendigo South Rotarians get to be in the company of Rotary royalty. However, that all changed on the evening of November 18th, when Rotarians Merlyn Quaife, Greg Noonan and Matthew Scott journeyed down to Etihad Stadium in Melbourne for an evening with John Germ.

Preparing to take over the reigns of Rotary International from Ravi Ravindran in July 2016, Mr Germ is busily jetting around the Rotary world meeting many fellow Rotarians before taking on the big task that lies ahead.Mr Germ is a member of the Rotary Club of Chattanooga, Tennessee, USA, where he has been a member since the late 1970s. Mr Germ was encouraged to join Rotary by his employer after having spent some time in the JC’s movement. His employer at the time paid half of his membership dues. His employer wanted him to be involved in community service work for his own fulfilment, not simply because the boss wanted him to. This is a philosophy that has remained with Germ until this day, that in service, we should want to make a difference.

District Governor, Julie Mason channeled her inner Jana Wendt, doing an excellent interview on stage with Mr Germ. Asking all of the hard-hitting questions, we learnt about Mr Germ’s early family life, his career in drafting as well as his involvement in the United States Air Force. This involved one incident where his flight crew had a lucky landing in their aircraft around the Vietnam war era, where the plane they were flying in developed a crack in the cockpit windshield.

For me as a young Rotarian, it was interesting to hear from Germ how when he finished studying, he would go around to the engineering businesses in the area and interview the employers for a job. This seemed somewhat foreign to me, as I am used to being interviewed by the bosses for work, not the other way round. How many teaching jobs could I have had to date if the boot was on the other foot? Bendigo South Rotarian, Merlyn Quaife said of hearing RIPE John Germ, that “he struck me as a man who practices tough love. He brings to his new role a wealth of experience and humanity. His comments on the need to accept changes in society and extend our thinking to encompass this as we work on making Rotary relevant to younger members was most pertinent”.

DG Julie Mason and Germ spoke of his views on the future direction of Rotary. “Ask, ask, ask and Do, do, do! This was the message I received from RI President elect John Germ, said Assistant Governor for Goldfields North, Greg Noonan. He spoke about clubs in the 21st century being flexible in their meetings and meeting structure. He commented on clubs developing relationships with the business community for it to be involved in projects and to have representation in them. From such relationships an understanding and knowledge of the work of Rotary can be gained and hence support, both financial and human, can be contributed. John is a very inspiring, motivating and thinking person under whose leadership Rotary will advance and become stronger”.

The evening in Melbourne was truly an enjoyable one, full of fellowship and fun. It was a combined event for all five Rotary districts in Victoria, and a great opportunity to network. It’s amazing how many Rotarians you actually know from district and outside of Bendigo. I even ran into a couple from Bribie Island who I had sat next to at the dinner table when attending the September Rotary Success conference in Canberra.

Also on the night, many awards were given out, including one for meritorious service to Bendigo’s own Gordon McKern. It’s an excellent opportunity to attend such events when they come to our region, and to know a little more about our future world president. To have met John Germ makes the high office of Rotary International President a little bit more relevant and closer to home for those of us in District 9800.